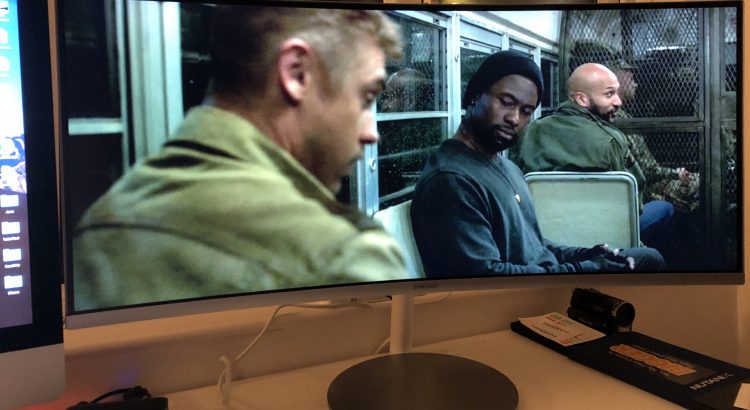 This is a little something that I thought that I would put something out there on – as quite frankly, As I was astonished that getting a monitor to work inexplicably difficult (read on and you will understand that I was only being a mild idiot during the process!).

So, a few years ago (I forget when exactly) – I decided to ‘join the dark-side’ and purchase an Apple Mac. For decades, I had only ever had PC’s as home computers and in my work had pretty much worked only with Microsoft – but I just wanted something that ‘just worked‘ and given the financial investment would last me at least five years.

This led to me purchasing a 27-inch iMac – which I have to admit I have never regretted as it has been a brilliant machine and whilst I still work with and love the WinTel platform – I just adore my Mac(s) – yes, I will also admit I have more than one (three now)!

The specifications of this monitor can be found here however the relevant part for this post is the connectivity.

It comes with Thunderbolt 3 support, as well as HDMI. Mini Display port connectivity is also possible via the Thunderbolt 3 ports via an adapter.

This is where I came unstuck a little and I hope that this helps out someone who find themselves in the same position that I did.

You see, I wanted to connect the monitor to my late 2015 iMac 27″ with 5K Retina display. The iMac has Thunderbolt 2 ports – no display port and no HDMI – so I thought OK – all I need is a Apple Thunderbolt 3 (USB-C) to Thunderbolt 2 Adapter and, after a rummage in a drawer I found a Mini Display Port cable which I have no idea I had nor where it came from!

So, I grabbed the adapter from my local Apple store, rushed home like a kid at Christmas and plugged it all in, turned it on, excitedly waited for it to boot and then promptly started at a blank screen on the Samsung. Nothing, nada, bubkiss.

I tried searching all input sources time and time again, tried to get the iMac to detect monitors – absolutely nothing!

Of course, at the time all of my other computers at home either didn’t have HDMI connectivity or were Thunderbolt 2 as well – so I couldn’t test the monitor with them – but I guessed that because it powered up and I could see the it’s configuration menu it was working. So, that only left the adapter or the Mini Display port cable (I knew that the thunderbolt 2 ports were working on the iMac as I had been using them with a TB 2 to VGA D-SUB adapter).

I figured the chances of the cable being faulty were slim – so that led me to take a closer look at the Apple Thunderbolt 3 to Thunderbolt 2 Adapter.

After some Googling, which gave me a lead (pardon the pun) I actually had a look at the adapter packaging and it hit me like a tonne of bricks (as well as in no short measure a degree of embarrassment).

What you WILL need!

If you have any Mac’s with only Thunderbolt 2 connectivity and decide to purchase a SamsungCF791 you WILL also need the following (or supported variants from other vendors) to get the bugger to work:

Do not be tempted to purchase a mini Display port cable to save a few pennies – it really won’t work despite the standard being compatible with TB2. The Apple adapter only supports a true Thunderbolt 2 cable!

So that’s it – if you get one of the Samsung bad boys (and I really would recommend it) and you have only ThunderBolt 2 connectivity – you will also need the additional bits above!