Let’s kick off this post by considering the following Exchange 2010 DAG Configuration:

In summary – the Exchange infrastructure is spread across 3 geographic sites. There are two DAG nodes on site A and B which are also running the Client Access Server and Hub Transport roles.

At site C there is a file share witness server which has connectivity and oversight of both sites A and B.

Client Access Servers are provisioned as a Client Access Array where the DNS record for the CAA points at the node located in site A and is manually changed when a switchover is needed. There is NO hardware load balancer within the configuration.

Now I know you might be thinking; the above is not technically a supported configuration – and you would be right – but in fairness, there are a large number of companies around which have exactly this type of Exchange 2010 topology, so whether we like it or not many of us are in the position where we have to support something that is not quite the way we would like it to be.

With the above statement born in mind we need at times to come up with creative solutions to help us as Exchange Administrators to mediate the problems which such architectures present – so lets consider the main limitation that the above scenario presents to us:

So given the above situation, what can we do to alleviate the issue as described above?

Well I have come up with a Powershell which is designed to run from an independent server within a topology like the one depicted above which can either be scheduled to execute at a specified interval (which will check for the availability of the Client Access Array) – and if it does not get a reply – points the CAA DNS record IP address to point at the other server running the Client Access Role. The script can also be used manually to change the record – this all conceptually this looks like the following: 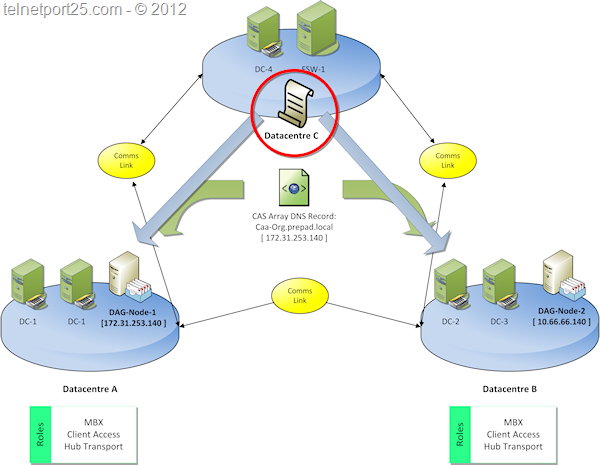 The switch over script is available for download from the following location:

You can also copy and paste the script to a file on your chosen server from the code below:

The script requires 5 mandatory parameters which are as follows:

Therefore from a Powershell command windows an example looks like the following:

Which should produce output that looks like the following:

In order to get the best out of the Switch Over script you should schedule it to run on your chosen server at regular intervals (I would recommend every 5 – 10 minutes). This will allow for the remote server running the script automatically detect if the CAA goes offline.

If you plan to run the script “standalone” (e.g. just to perform a DNS change when you know that the Primary node has failed) I recommend that you reduce the $ConsecutiveFails count to 1.

Of course the best course of action is always to try to deploy resilient Exchange infrastructures – but if you find yourself working with the scenarios described in this article – feel free to have a look.