I have been asked this quite a bit over the years, and indeed in most of my articles where I provide PS based scripts I tend to re-iterate the process for running or scheduling them. So rather than continue to cover the process over and over again, I thought that I would put together a full post on how you can run scripts within your respective environments.

PowerShell was designed to be a more secure scripting platform over its main predecessors within a Windows environment (e.g. VBScript or JScript) – therefore a number of security features were built into it – the most prominent of which was the principles of “Execution Policies”.

Group Policy can also be used to determine settings at a user and computer level.

There are a number of levels which Execution Policies can be set at – these are shown below (which is based upon the following information Source: http://technet.microsoft.com/en-us/library/dd347641.aspx):

On my servers I tend to run either “AllSigned” or “RemoteSigned” as those levels are sufficient to give me a good trade off between security and functionality.
You can check your PowerShell Script Execution Policy setting by opening a PowerShell Session on your machine and typing in the following command:

Which will produce some output similar to the following: 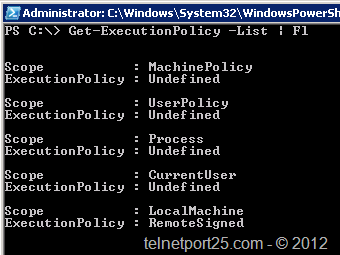 Given the above, if you are intending to run scripts that you have downloaded to your Local Machine you will need an Execution Policy of either “AllSigned” or “RemoteSigned” in order to run them.

For example – if you want to change the Execution Policy to “RemoteSigned” (my preferred personal level) – open a PowerShell session (you will need to run PowerShell as an Administrator) – and type the following command:

You should also note that if you are using “RemoteSigned” as the Execution Policy and you have downloaded a script from the Internet you will be presented with the following error upon script Execution:

You will need to “Unblock” the script in order for it to function (this is because an attempt is made to find a Trusted Publisher for the script on the web and cannot do so, as the script may not be signed) – this is done by selecting the script file using a right click and from the context menu that appears – choose properties, and then from the properties dialog click on the “Unblock” button – see below: 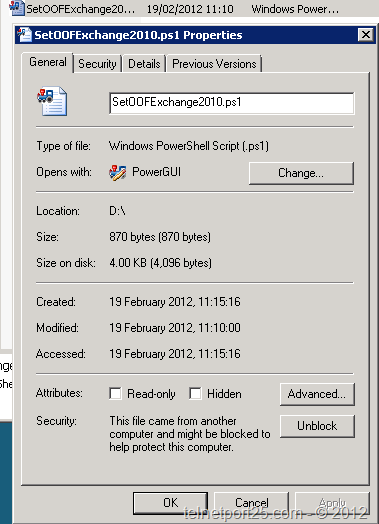 You have a couple of options here:

If you wish to run an Exchange PowerShell script from within an existing PowerShell session the easiest way is to do so via the Exchange Management Shell.

Open the Exchange Management Shell and then type in the path to your Exchange based PS script:

If you would like to run a script from the Windows command prompt you can:

It is important to note that if you are running Exchange based scripts from the Windows Command prompt by passing them as a parameter to Powershell.exe you should add the following line at the top of each script:

This will load the relevant Exchange Management Shell commands for your script from the vanilla PowerShell session.

You can execute your scripts by adding the the Powershell.exe command (see above) into a Windows Batch file. The batch File can then be scheduled to run as part of a scheduled task – or configured within Group Policy to execute as a start up script.