The mother of all heat sinks…

Some of you may have read my recent article about my new test lab (which I had to hastily assemble after my old one went to the great testing god in the sky). I finished the article by explaining that if there one thing that I would change about the setup, it would be the (crappy) stock cooler that ships with the Intel i7 2600K.

Well over the weekend I was working on some video rendering for the telnetport25.com You Tube channel, which was taking a tad too long on my home desktop PC.

I thought ~ “Heck, I have a brand new i7 rig here, I could install my video software on to it and render via that Machine – surely it will be quicker”.

I was right, technically it would be quicker – what I did not count on was that the rendering process would max out all four cores in the i7 and send their temperatures soring to over 98 degrees Celsius – the long and short of which was my server locked up on me!

I starting thinking that I must be crazy (which most people knew already), I have this great machine and cannot use it to anyway near it true potential as I was too tight to go out and buy a new Heat Sink for the CPU.

So, I started having a look around on the web for a suitable Cooler from my usual suspects (Dabs, Scan etc).

In the end I could not find anything that I was really interested in, so I popped a mail off to my local PC store (a place called Planet-UK ~ special mention chaps! whom were really good at recommending the following bad boy to me:

http://www.scythe-usa.com/product/cpu/053/scnj3000-detail.html which they just so happened to have one left in stock.

So today I merrily popped off down Planet to purchase the Scythe Ninja 3 (I mean how the heck could I not buy a cooler that was called “Ninja” – it would be against the law!).

This evening I got the heat assassin home and set about removing the scummy Intel Stock cooler from my server and installing the new device and thought that I would write about my experience.

I have a Antec 85 Dark Fleet full tower case, which is designed to allow for the installation of Heat Sinks such as the Ninja 3 without having to remove the mother board. However, as I quickly found out this is a cruel marketing ploy – there is no sensible way to install the Ninja 3 in the Dark Fleet case without taking the motherboard out (don’t try it, honestly I did and I wasted a load to time coming to the conclusion that I had wasted … well a load of time – just take the motherboard out).

In fact, adding into the mix that I have an Asus P8 z68 pro mainboard, I also had to remove the chipset heat sinks before I could even contemplate installing this beast of a cooler onto my i7! (this added on more time and sobbing).

Given the above – I have to report that the actual installation process for the Ninja 3 was a real pain in the arse (well for me it was) taking about 2 hours in total (mind you 1 hour and 45 minutes of it was trying to retrieve the Ninja 3 screws from various places either in the case, or that had lodged themselves into various positions on the Motherboard after I had dropped the little buggers).

But when finally done, the finished article is very sturdy and looks amazing – see below: 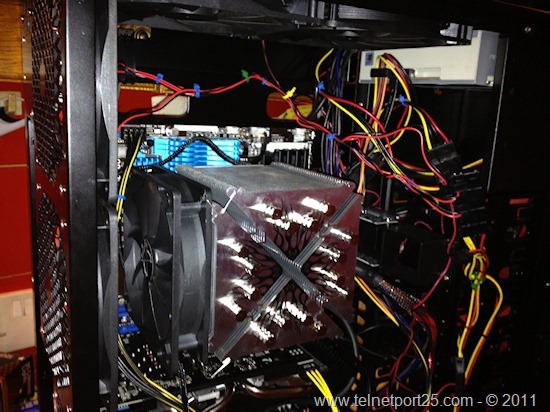 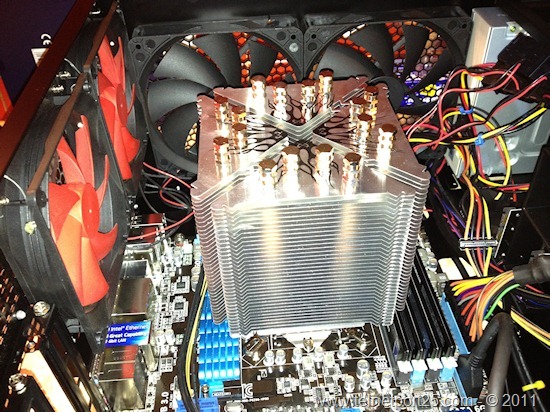 Ok, so it looks sexy and would probably withstand a thermo-nuclear attack – but how well does it perform?

Well, idle CPU temperatures on the server would be around 32 – 35 degrees per core with the standard Intel Stock cooler installed; however with the Ninja 3 these dropped to around 22 – 25.

But idle temperatures are of course not what I was interested in, I wanted to know how the CPU would cope under load.

I decided to run the same Video rendering process that I had attempted at the weekend – and I was really very pleased with the results.

Each core during the rendering process topped out at about 53 degrees (bearing in mind that each core hit over the Tj Max value of 98 degrees with the Stock Cooler), but what excited me most was that each core never went above 40% utilisation – whereas previously each core was maxed out at 100% ~ really cool!

It is important to note that I have not overclocked this rig – all of the performance management is taken care of by the Asus BIOS.

I love this cooler.

Its called “Ninja”, its big and shiny, it comes with a large knob which allows you to control the fan speed and above all else – for a Air Flow based Heat Sink it really does its job well.

It’s the largest cooler that I have seen outside a proper server so you should really pay attention to the dimensions of both your case and the cooler itself – otherwise you might not be able to get the doors back on (luckily this did not happen to me).

It is true that it is a pain in the backside to install – but, that pales into insignificance when you see the benefits it brings to your system – so if you are in the market for a new CPU cooler, and don’t fancy that jump to water cooling just yet – give it a look! I cannot wait to point some Exchange Server madness at it

Installing Nagios on Ubuntu Server 11.10 then Monitoring Windows and Exchange Servers–Part 1–Configuring Ubuntu for the Installation of Nagios Core…

Installing Nagios on Ubuntu Server 11.10 then Monitoring Windows and Exchange Servers–Part 1–Configuring Ubuntu for the Installation of Nagios Core…