Note: The download version of this tool has been updated to reflect the latest version.

Ok, I admit that this is turning into a little bit of a saga – for those of you whom have been following the site recently will know that on the 26th November I released my Roll-Up Encapsulation tool (version 1.0), on the 27th I released an update (version 1.1) which included two new features in the form of Forefront Service maintenance and allowing the administrator to disable bespoke services from within the tool’s interface.

On the 5th of December – to coincide with the release of Exchange 2010 Service Pack 2 I released version 1.2 which allowed for both Service Packs and Roll-Ups to be installed via the interface, as well as allowing for custom Powershell commands to be executed.

I thought at that point my work was done and that I could return to the tool at a later point in time, however I was contacted by a chap called Charles Ojserkis (thanks buddy!) who pointed out a rather embarrassing bug (which I had missed) and also made a couple of really cool suggestions to improve its functionality.

What Charles basically said was;

Charles then went onto explain that it would also be useful if folks could see the output of the Powershell scripts that are executed by the tool, just to check for errors (I had not included this in the original version probably because I am lazy), but it seemed like a good idea to me.

So, out came my copy of Visual Studio – and set about correcting the errors and adding a couple of new features.

Now that I have completed the development – one of the first things that you will notice about the new version (version 1.3) is that the interface has been slightly redesigned to encompass both a “Command Output”  and a “Hints” window – see below; 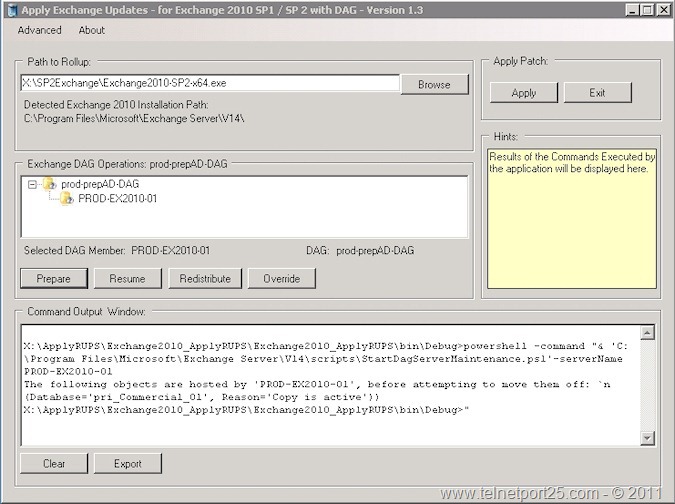 When you “hover” over an active area within the interface you will be presented with a hint in the “Hints” window, and when you execute a shell command via the interface, the results will be populated into the “Command Output Window”. You have the option of both clearing the Command Output (via the “Clear” button) as well as exporting the log to a file (by clicking on the “Export” button).

I have also made some “behind the scenes” changes which include better exception handling and stopping certain services when commands such as the FSCUTILITY are executed – and then starting those same services again before the patch is applied.

I have also renamed the tool to “Apply Exchange Updates” – which seemed to make more sense, given that it now supports both Roll-Ups and Service Packs.

As before this version of the tool supersedes all previous releases and I recommend that you replace any current version that you are using with the one below. Installation and functionality are the same as described here, here and here.