Today I have released a slightly ahead of schedule “Patch Release 1” for the OOOCTA 3.5 Out of Office configuration tool.
I say that it is ahead of schedule, as I have had some feedback from members of the user community about a couple of bugs which, although whilst not serious – do impede the functionality of the tool and I felt compelled to get a patch release out as quickly as possible.

I have to admit some of the problems reported I did not see in the original release version, but I was able to recreate them in my development lab – so perhaps I do need to focus on some tighter “source control” – one of the problems was very embarrassing as I had not included a column within a SQL table – which caused an entire module not to function as expected.
The only defence that I can offer up at this stage would be – that for the most part I am the only person doing the testing – therefore I can become “code blind” – so if there are any folks out there whom would like to be testers let me know.

Anyhow – the patch is available for download below – and contains fixes for the following reported issues:

When using the OOOCTA application to set an Out of Office for a user – and you enter in a ‘ (single quote) in either the Internal or External message boxes – the following error is thrown by the application:

This problem was caused by the SQL logic not stripping single quotes from the Execution query – and therefore adds an additional column to the SQL stream – causing an unhandled exception to be raised.

The SQL logic has been updated to handle single quotes in the SQL stream.

When trying to set an OOF for a user – you enter in the name of the user and click on the check button and nothing happens.

Although this issue does not seem to affect all configurations, the issue stems from the OOOCTA interface not properly handling values from Active Directory which are not populated (e.g. Department).

In this update the code has been updated to handle blank values from Active Directory.

When using the Disable OOF for a given user – when clicking on the confirmation button (after checking for the existence of the user) nothing happens.

Due to a missing column within the  tbl_DisableOOFUser table in the OOOCTA_DB  – clicking on the confirm button produced a hidden exception and therefore not completing the SQL transaction which adds the user to the database.

The update contains a SQL file which upgrades the OOOCTA_DB so that the column is present – therefore fixing the issue.

After installing the application – when accessing the System Log or the Audit log – the following unhandled exception was thrown by the OOOCTA_Interface:

The erroneous connection entry has been removed from the pages contained within the within the patch.

When scheduling a report on an existing set of OOF settings for a user – the only way to view the results was via e-Mail.

Not strictly a problem – but more of an inconvenience. In essence you could only view OOF reports via e-mail.

The patch contains a new ASPX page, that allows for users to view the contents of the tbl_User_OOFEnabled table within the database. In addition the OOOCTA Command Processor Service has been modified to not clear this table automatically.

Please note – this is a patch release, not the full version of the product – you will need to have the RTP (Release to Public) version of OOOCTA installed before applying this patch.

Download the above patch to your OOOCTA Server.
Double click on the “ooocta351-Patch1.msi” and follow the installation wizard through (see below). When asked for an install location ensure that you have chosen the original installation location of the OOOCTA 3.5 RTP binaries as there are a number of files that need to be overwritten by the patch with new versions.

NOTE: Before you update the OOOCTA with Patch 1 you MUST stop the OOOCTA Command Processor Service from within the Windows Service manager – if you do not do this, the service binary will not be updated to the latest version.

The installation of the patch is pretty straight forward, and involves a simple setup wizard – and the execution of a batch file to update the OOOCTA_DB SQL database – detailed steps are below.

After you have double clicked on the “ooocta351-Patch1.msi” setup file – you will be presented with the following screen: 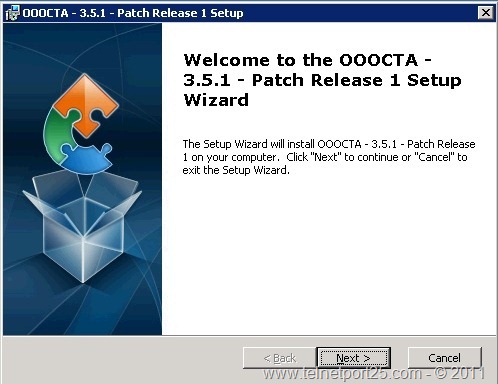 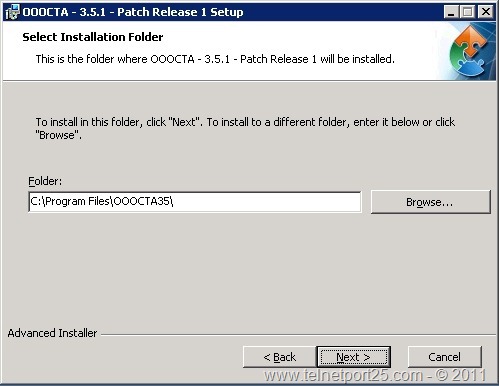 You will be asked for the location of the EXISTING OOOCTA installation (by default this is c:\program files\ooocta35\) – if you changed the default path when you originally setup OOOCTA you will need to browse the installation location. When you have located the path of the original location – click on the “Next” button. 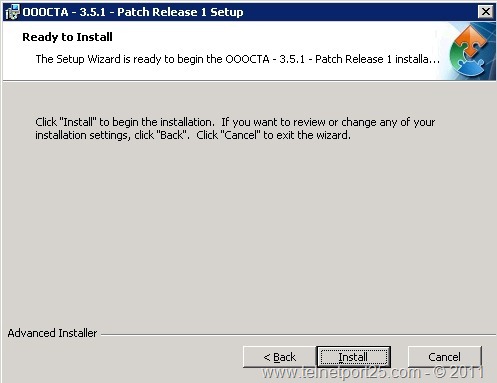 You will be asked to confirm your settings – click on the “Next” button. 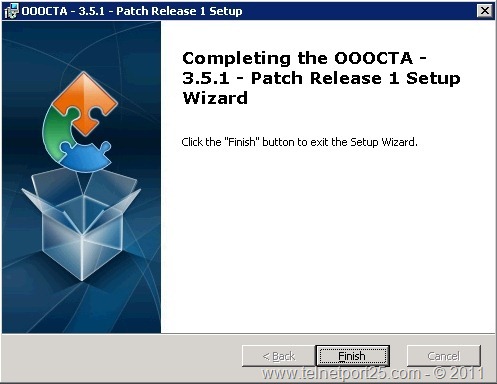 When the OOOCTA Patch setup has completed – you will be presented with the installation complete dialog (above) – click on the Finish button to exit the wizard.

When the binary setup is completed, you will need to navigate to the SQL folder which is located within the root directory of the OOOCTA binary files (this is by default c:\program files\OOOCTA35\SQL\) – see below 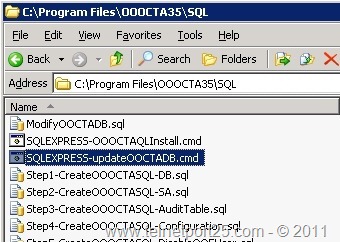 From within this location you will see a file entitled “SQLEXPRESS-updateOOCTADB.cmd” – if you are using SQL Express and your instance name is “localhost\SQLEXPRESS” double click on this file to update the OOOCTA DB – see below;

You will be asked to press “any key” to continue before the update takes place – hit the space bar to begin the update process.

When the Database has been updated you will be presented with the following screen:

You can now restart the OOOCTA Command Processor Service.

NOTE: If you are not using SQL Express or the default SQL instance is not localhost\sqlexpress – you will need to open the “ModifyOOCTADB.sql” file in SQL Management studio (after connecting to the correct SQL instance) and execute the file.

I would like to thank Stan Cooper and Andrew Pretty for their support and valued feedback which has contributed to the updates provided in Patch 1 – and I urge anyone whom is experiencing problems with OOOCTA to let me know. If I am made aware of issues I will endeavour to fix them as soon as I can.

The patch and OOOCTA are working perfectly. Thanks for all of your hard work and brilliance!

Feature Request: Ability to get a list of everyone that has their OOO set (like OOO v. 1.2 and 1.3 could).

Thanks Stan, I will have a think about the best way to implement this request. I have a few articles for other sites that I am working on at the moment which need my weekend attention – but I am hoping to begin coding again very soon. Thanks for all of your support – and I am glad that it is working!

This seems a really great tool, but I can’t get it to actually ‘do’ anything – ie it doesn’t set an OOO or query one.

Firsrt, I’ve installed on Server 2008 R2 – could this be a problem? The site works ok as far as:
Page loads
System logs report ok – e.g. the System Log correctly reports a service restart; the queue viewer shows me a queued request(s).

However nothing ever processes.

I have installed 3.5 and the patch.

I’ve left all the defaults on and am running on a sqlexpress install on the same box.

The only clue I can find is the windows applicaiton event log reported this yesterday evening:

….but I restarted the service ok and it still doesn’t process.

Any suggestions as to what to look for greatly appreciated!

Hiya Ian, sorry for such a late reply – please see the following post http://www.telnetport25.com/2011/10/troubleshooting-tips-when-running-ooocta-3-5/ which I believe will help sort out your issues – failing that, just let me know and I will try to help further.