I thought that I would do a Quick VMWare LAB sizing post (to complement my Prerequisites post for Exchange 2010) for all of you whom are considering (or indeed working with) Exchange 2010 within a VMWARE Server (or perhaps any other version of VMWARE) LAB environment.

To a certain extent, I do accept that some of this is a little subjective – as each LAB environment tends to be different from the other having many differing specifications – however the initial premise of “How much resource should I be allocating to my Exchange 2010 servers in a LAB VM” remains very much the same.

Please note, that this is NOT a recommended specification for Exchange 2010 in a production VMWARE environment, as that is a completely different kettle of fish – and one that I will cover off in a dedicated post.

Ok, so you might be thinking, and indeed I would not blame you for doing so – so if this is not for production – why bother Andy?

Well, like many of you I am sure – I do a lot of work with Exchange 2010 in test before I then roll out into production (for example testing be full implementations, or indeed just strange things that my customers ask me to do to their Exchange 2010 environment). I have found that there is a fairly large difference in the specification which a lab VM lab machine needs for Exchange 2010, when compared to Exchange 2007 (which you might expect to be honest) – to function adequately.

Just before I rock on – it is worth giving you a baseline of my lab specification (in terms of VMWare Hosts) – I did a post sometime ago located here – which will give you an idea of what I am working with – however I have now split my LAB across two machines – one Host I run Domain Controllers on, and the other (which is the basis for the linked post provided) I run Exchange 2010 machines – however I still use VMWare Server 2 as the host Hypervisor – so you can visualise this below is a simple representation of the configuration: 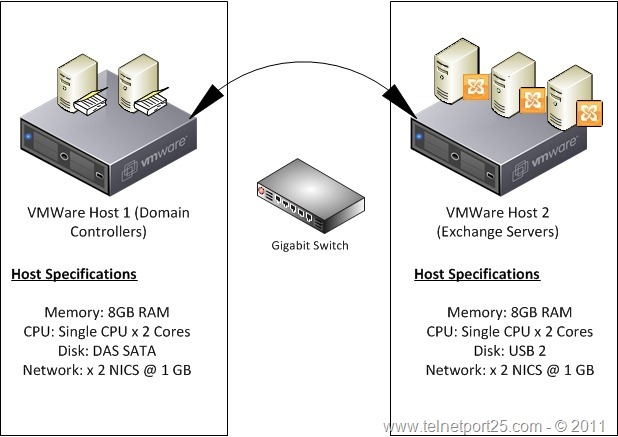 Prior to the splitting of the VMHost Roles – I could concurrently run between 1 – 3 Exchange 2007 machines combined with a single DC on the same host (and a number of other multi-purpose servers) with acceptable performance for testing (the Exchange 2007 machines would typically be a Basic Exchange Sever and two CCR cluster nodes).

The Exchange 2007 Machines would have the following resources allocated to them from the Host (please note that the Cluster Nodes would obviously have more disks and NICS):

However in the context of Exchange 2010 – running a Guest VM with a just 2GB of RAM within the LAB led to some performance issues, as from what I have found – Exchange 2010 likes a base memory load of around 2.05 GB of RAM and a percentage of the two processor cores allocated to it when running on Windows Server 2008 R2, before you do something creative with it!

Therefore given the above – the following specification is what I have found to be a good starting resource allocation which will make Exchange 2010 useable within VMWARE: 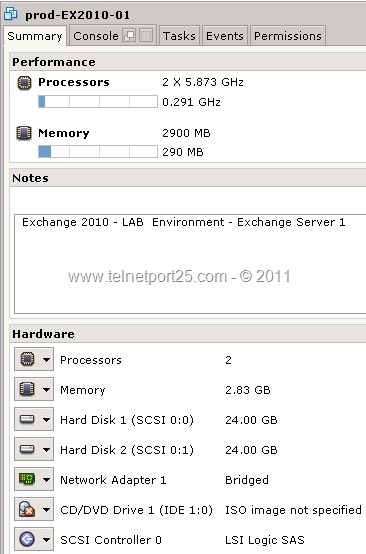 Also I would recommend a base system disk of around 24 GB with a resource disk (where you can store the Exchange 2010 installation disk DVD for local execution) of around 24 GB – this disk can later be used for Databases.